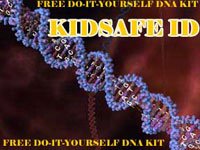 (excerpts from the article)
I was shopping for groceries at my Local Albertsons when I saw the all too familiar Child Fingerprinting tables.
They are part of a Child ID program called Child Protection Education of America.
The fingerprint card produced in the "ID ME NOW" program not only contains the fingerprint scans and a digital photograph of a child, but it also supplies instructions on how to perform a DNA collection.

The company even suggests tagging children like they are dogs.

Related: Kids Being Conditioned To Big Brother and Police State
Posted by Liam at Wednesday, February 22, 2006 No comments:

One Thousand A Month Tortured To Death In Iraq

Dr. John Pace drops a bombshell that translates as a whisper through obscure Maltese paper.

Proving that Abu Ghraib and Gitmo are the tip of the iceberg, the outgoing UN human rights chief dropped a bombshell when he told an obscure Maltese newspaper that as many as a thousand detainees a month are being tortured to death in Iraq.

Footage of US army personnel seizing a taxi cab and destroying it with an Abrams tank was broadcast two years ago on PBS. The crime? Stealing firewood.

More than half of Iraqis now say life was better off under Saddam and 47% support insurgent attacks on US forces.