Hitler - Was he ever born? 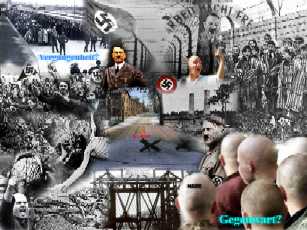 Seems to be quite a difference in opinion as to the exact date of birth of one Adolf Hitler.


I would seem that 20 April wins out as the most popular date for Hitlers birthday. That is if popular opinion is the correct thing to gauge it by. After all the popular opinion of the powers in Germany in the 1930’s & 40’s wasn’t to be questioned now was it?

We also find that Wikipedia has some interesting things to say about the man:
“Hitler was a black comedian who gained power in Germany facing crisis after World War I.”
(I see that that’s been changed now, I suppose to what it should say. But one never knows what Wiki might say next.)

Remember, this year the Days of Remembrance fall between April 23 and April 30.
Visit http://www.ushmm.org/museum/exhibit/focus/dor_06/ for more information.
Posted by Liam at Wednesday, April 19, 2006